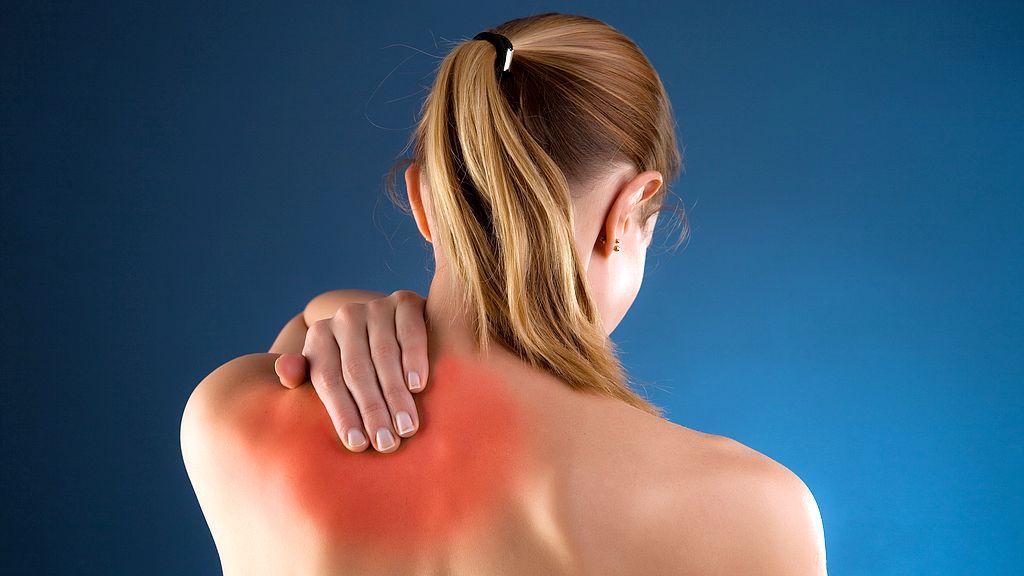 treatment and difficult to explain the place of occurrence

The prevalence of pain in the shoulder (shoulder region) among the adult population is 4–7%, rising to 15–20% at the age of 60–70 years. [4]. Pain in the upper third of the shoulder is one of the most common complaints with which patients turn to neurologists and orthopedists [5]. Pain in the shoulder is just a single symptom, which can be a manifestation of many, often very serious, diseases. It leads to frequent disability, a serious deterioration in the quality of life due to impaired hand functions [2,7].

Let's list some anatomical features of the shoulder joint. The joint is formed by the glenoid cavity of the scapula and the head of the humerus. Its great mobility is achieved due to the developed auxiliary ligamentous-muscular apparatus. The shoulder joint is deprived of strong strengthening intra-articular ligaments, unlike, for example, the hip and knee joints. Joint stability is mainly dependent on the rotator cuff muscles, four of which are combined into a group of so-called short rotators. The supraspinatus muscle moves the arm to the side. The infraspinatus and small round rotate the humerus outward and pull it back. The subscapularis muscle rotates the shoulder inward. [1,3,4,5].

For ease of perception, we have identified 3 groups of diseases in which pain occurs in the shoulder, according to the anatomical principle (in other words, where is the cause of the pain):

It is often difficult, and sometimes even impossible, to single out any one reason. Often, diseases of one group are combined with each other and with diseases of other groups.

Risk factors for shoulder pain can be both direct trauma and chronic microtrauma to the structures of the shoulder joint. Often, the disease occurs after physical exertion associated with professional work or sports, when the patient performs long-term stereotypical movements in the shoulder joint. The cause of shoulder pain can be congenital structural features of the joint and ligamentous-muscular apparatus, such as weakness of the short rotators of the shoulder and an abnormal position of the head of the humerus in the joint. A sharp wave of the hand or shaking the laundry after washing against the background of the existing degenerative changes in muscles and their tendons can lead to muscle ruptures with a sharp pain syndrome [1,3,4,8].

Degenerative-dystrophic, infectious diseases, some diseases of internal organs (strokes, ischemic heart disease, myocardial infarction, diseases of the lungs, gall bladder) play a significant role in shoulder pain [1,2,4]. Particular attention should be paid to shoulder pain, which does not diminish at rest, but is constantly increasing (especially at night). This feature can be a manifestation of serious diseases, including cancer [2]. Often, calcium salts are deposited in soft tissues, peculiar “stones” are formed around the shoulder joint (calcifying bursitis), which complicates the course of the disease [3].

To clarify the nature of the lesions for pain in the shoulder, it is first of all necessary to assess the exact location and nature of the pain, especially its manifestation with different movements in the shoulder. Here are some examples of diseases that are accompanied by shoulder pain.

The most common manifestation of shoulder pain is shoulder periarthritis (PS). These are mainly working people aged 40–65 years. The disease affects both men and women equally [1,5,7]. Younger people are also often affected. In case of periarthritis of the shoulder scapula, the patient most often complains of pain when trying to put his arm behind his back [1,5,7].

Muscle lesions are characterized by deep, usually moderate pain. Their intensity does not change over time. The patient complains that his shoulder is "aching". Pain is triggered by specific movements during the contraction of a particular muscle. Painful lumps (called trigger points) can often be felt in the muscles. Moreover, of these, pain can be “reflected” in other parts of the body [2,4].

Moderate pain that occurs some time after the injury, while maintaining movement, speaks in favor of partial muscle tear. Partial rupture of the supraspinatus muscle is indicated by Leclerc's symptom - “bewildered shoulder”, when the patient first raises the scapula and only then tries to move his arm to the side [3,8]. The supraspinatus and subscapularis muscles are more often affected in the places of their attachment. The junctions of muscle tendons, as well as ligaments with the surface of the bone, are special anatomical formations - enthesises. The inflammation in these areas is called enthesopathy. Its most characteristic manifestation is pain during movement, for which one or another muscle is responsible and pain during palpation of enthesis [3,8].

Often shoulder pain can occur with diseases of the cervical spine. With many of them, the cervical roots, which innervate the shoulder joint and surrounding tissues, are affected. Characterized by severe shooting pains ("as if shocking"), which may be accompanied by weakness of the muscles of the shoulder girdle, impaired sensitivity (numbness, feeling of "creeping", heat, cold in the shoulder and arm) and other dysfunctions of the corresponding nerves. The pain can also be burning, boring, piercing [2].

With subacromial bursitis, patients complain of pain during abduction and flexion in the shoulder, wake up when they lie on the affected side. Dressing, combing, applying cosmetics is difficult and painful [1].

In 1947, the shoulder-hand syndrome was described. The disease is characterized by a sharp burning pain in the shoulder and simultaneous changes in the area of ​​the hand (cold to the touch edema, blue skin, muscle loss, destruction of bone tissue). Similar manifestations in Zudeck's syndrome, in which there are swelling, tension in the soft tissues of the hand, changes in temperature and color of the skin. The skin of the hand is thinned, its depressions and folds are smoothed out. Movement is limited and painful. Characterized by violations of pain sensitivity, destruction of the bones of the hand (osteoporosis) [3].

In women, a disease of the shoulder joint capsule (the so-called capsulitis) is often found. Trauma is the most common cause of the disease. Characterized by sharp pain and limited mobility of the shoulder in all directions. This condition is often called “frozen shoulder” [3,5,8,12].

The above list of diseases is by no means complete. Shoulder pain has a complex mechanism, and determining its cause is often a difficult task even for an experienced specialist. Each of these conditions has a complex prognosis and requires an attentive approach and serious treatment.

Treatment of shoulder pain is predominantly conservative. It includes the local and systemic use of analgesics and anti-inflammatory drugs, therapeutic blockages [1-7, 11-12], as well as physiotherapeutic methods [9-10, 12]. Extracorporeal shock wave therapy (ESWT) is increasingly being used as an independent method and in the complex treatment of shoulder pain in various diseases. The high efficiency of the method in the absence of side effects and a minimum number of contraindications was noted in a number of publications, including foreign ones [9-10, 13-17].

The scientific evidence base for shock wave therapy significantly exceeds that of other physiotherapy techniques. Acoustic shock waves trigger natural mechanisms in the human body to combat pain and inflammation. The clinical effect of treatment far outstrips the appearance of changes on X-ray and MRI images (see http://awatage.com/bol-v-pleche-primenenie-ruvt). Already after the first sessions, patients notice an improvement in well-being, a significant decrease in pain and an increase in mobility in the shoulder joint.

The method of extracorporeal shock wave therapy has been used for more than 20 years for shoulder pain of various origins in European countries (in particular, Germany, Austria, Switzerland, Luxembourg and others). Today, the use of shock wave therapy in Ukraine allows you to completely eliminate pain syndrome and achieve full restoration of the patient's working capacity with the least time and financial costs.

neurologist at the Awatage clinic