The knee joint is one of the largest in the human body. Due to its complex anatomy and a large functional role in the body, it is he who is most often prone to injury. There is also a significant variety of knee injuries themselves (knee injuries). The patient can cope with some of them on his own, and in some cases, surgical treatment is indispensable.

The knee joint is formed by several bones:

The surface of these bones is covered with a special tissue - cartilaginous. To reduce friction in the joint cavity, a special lubricant is produced - synovial fluid. Between the femur and the tibia are the so-called menisci - crescent-shaped formations of cartilage. The knee joint strengthens powerful ligaments and muscles.

Let's list the frequent injuries of the knee (knee joint):

1. Tears of the anterior cruciate ligament. This ligament is injured more often than others. Its purpose is to stabilize the lower leg and keep it from shifting forward-inward. The rupture of this ligament occurs during impacts on the lower leg from behind, jumping, sudden braking during running and some other movements.

3. Tears of the posterior cruciate ligament. They are quite rare. Arise with a sharp shift of the lower leg back.

4. Damage to the menisci. Quite a common injury among football players and runners. Occur during rotation on the lower leg.

5. Bone fractures. There are several bones that form the knee joint and any of them can be injured within the knee joint. Such a fracture is called intraarticular. This injury is severe and almost always requires surgery.

6. Combinations of the above damage.

Knee injury clinic is quite typical. Acutely, often almost immediately after the moment of injury, there is pain in the joint, swelling, changes in the contours of the joint. In the area of the knee and lower leg, the skin color may change (pale or bluish). Feelings of numbness, burning, weakness, or trembling in the knee are also possible.

In the event of a knee injury, never load the affected limb. It should be given an exalted position. Complete rest is also a prerequisite. You can apply cold to the affected joint (for example, an ice pack) up to 5-6 times a day. The joint should be immobilized with a tight bandage with an elastic bandage. It is important not to overdo it to avoid pinching the nerves and blood vessels, the bandage should not cause pain.

Going to the doctor, of course, should not be postponed. Untreated knee injury can lead to its chronic pathology, which can lead the patient to disability, and it is much more difficult to treat it. In addition to a medical examination, an orthopedic traumatologist may recommend taking an X-ray or an MRI scan, and sometimes an ultrasound of the knee joint.

Treatment of a knee injury necessarily includes a gentle motor regimen. Immobilization with a plaster cast or other type of bandage is often necessary. Non-steroidal anti-inflammatory drugs are recommended to relieve pain and inflammation. Massage, physiotherapy exercises, physiotherapy methods of treatment play a very important role in full recovery. 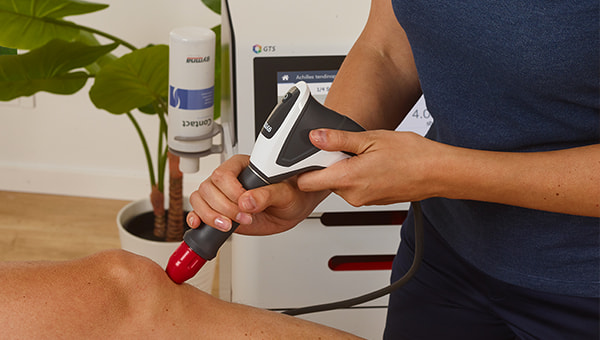 Shock wave therapy (SWT) in Kiev is one of the most promising methods for treating many knee injuries. The reparative and restorative effects of shock wave therapy in the treatment of knee injuries are manifested in a shorter time for the healing of injured ligaments and muscles, as well as the healing of bone fractures. Shock waves increase local blood flow, which helps to effectively prevent trophic disorders of the knee joint tissues. Shock-wave therapy, used in Kiev at the Avatazh medical center in the treatment of knee injury, eliminates local edema and inflammation, has a good analgesic effect.

The Awatage Medical Center uses the best equipment for shock wave therapy from the Belgian company Gymna - it has been producing physiotherapy devices since 1967! With over 20 special attachments, doctors can act on different areas to the desired depth.4

The most effective use of shock wave therapy in combination with biomechanical muscle stimulation using V-Actor technology, exercise therapy, and other orthopedic treatment methods. The duration of the course is individual for each specific injury, therefore, the treatment of a knee injury at the Awatage medical center in Kiev is carried out by an orthopedic traumatologist with mandatory monitoring of its dynamics. Shockwave therapy treatments for knee injury are safe, short-term and comfortable for patients.